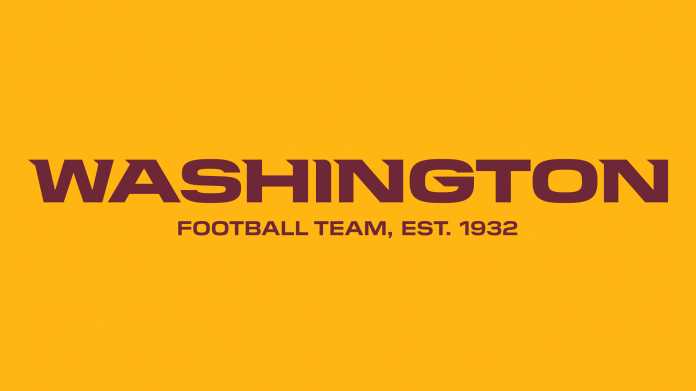 While some may question the move, Washington Football Team makes the most sense now.

ESPN first reported that the team would officially go by the “Washington Football Team” until they decide on a new nickname.

This is not a final renaming and rebranding for team; this is the name it wants to use until pending adoption of a new name in the future. pic.twitter.com/sBs0Uo0ICm

Washington will be spending the next 50 days working on removing the former logo and name from the stadium and merchandise. The team is expected to be up and ready to go before their season opener against the Philadelphia Eagles. Washington will be asking for feedback from players, alumni, fans, sponsors, and the community when picking the new name.

The team hired Terry Bateman as their new executive vice president and chief marketing officer. His responsibility will be to focus on rebranding the football team for the 2021 season.

“You’re doing a rebranding process that correctly takes 12 to 18 months. If you want to do it right, you have to take a deep breath, take a step back and go through the process,” Bateman said. “We want to do it right, we want something thoughtful and inclusive and smart and bring a lot of points of views into this and come out the other side with something everyone is proud of and can rally behind.

One thing that will not change for at least this season is the colors of the football team. The color scheme remains burgundy and gold and is expected to stick around to keep some of the team’s identity.

Going into the 2020 season, the team’s uniform will change from what it looked like in the past. Numbers will be on the helmet instead of the logo. “Washington” will be displayed under the NFL logo on the jersey with a solid burgundy color as the main color. The team showed what the uniform concept would look like for the 2020 season.

Washington will not have any change to its color scheme. It will still use burgundy and gold. The Redskins logo on the helmet will be replaced by the player’s number in gold. The Washington Football Team will debut its home uniforms in week 1 against the Eagles. pic.twitter.com/8DpC6b0Tyj

Why This is the Best Move Now

This move by Washington to not pick a nickname right now may not be popular, but it’s the right move. It’s not a flashy name and won’t get too many people excited. The move will give the team the time needed to pick the right name for the team.

Making sure that fans and players are involved in the decision is the most important part of picking a name. More than ever, the community must feel apart of the team and feel they have a voice. For too many years, Washington has only listened to money and didn’t care what other people think. How they pick a name in this process will make a difference.

Football fans want results now, but this type of decision takes time. They need the full season and the offseason to make a decision. This will be the biggest decision the organization makes in its history. Getting the name right could make or break the public opinion of the team which is not high right now.

Deshaun Watson and his new contract extension with the Houston Texans may not lead to future success. Ian Rapoport reported...
Analysis