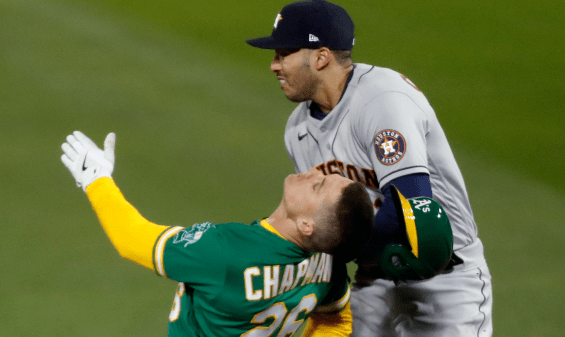 MLB decided to have the best team in the AL West start the season against the 2020 AL West champs*. Many people, including some in Vegas thought the Astros were not going to be that good this year. No doubt this is due to the 2014-esque regular season the good guys put on display.

Guess they forgot the 2020 playoffs.

The @astros bats are on another level rn 🔥🔥

Houston is the first team since the 2003 Yankees to score 8+ runs in each of their first 4 games. h/t @MLBStats pic.twitter.com/LlWD6zusN7

The Hitters Came to Hit

The Astros bats came to play to start the season, outscoring the A’s 35-9 in the opening series. 7 different Astros hit home runs. Two of the most important of those came in game four as Kyle Tucker got one after appearing to be in a bit of a funk all series and Chas McCormick got his first career shot. After 4 games every hitter on the 25 man has at least one hit, including Jason Castro with his 2 run shot yesterday.

The pitching staff did well too, holding the A’s to less than 3 runs per game. None of the starters had a truly lights out performance. Just a Greinke-ian continous solid all around game from everyone. One pitching standout was Brandon Bielak coming in relief to pitch 4.2 innings of perfect ball. If this is what the team can do without Valdez and Odorrizzi this could be a special year.

The talk amoungst fans and commentators has been are the Astros this good, or is Oakland this bad? Odds are the truth is somewhere in the middle. Do not make the mistake of thinking this A’s team is some bottom feeder. They have a decent squad that will get some wins and likely make some noise. Right now, the 2021 Astros appear to be hitting on all cylinders, a pace that will slow down at some point.

Whats the difference so far? Every person on the team, or who covers the team, or who is just around them says the same thing. The guys are just having fun. Last year the team did no take well to the covid proticals and they seemed to be pressing, not enjoying the game. The team is now playing with relaxed joy and some of that old swagger.

Next up for the Astros is the Angels for a two game set. In Sunday’s game against the White Sox, Ohtani continued to do crazy Ohtani things with a 450″ home run to go along with some 100 mph+ pitches. Fortunatly, the Astros won’t be facing him on the mound and maybe not hitting as he was involved in a collision at the plate.

Stick with Crush City Station for Astros news and notes throughout the season, and if you’re into fantasy baseball check out our Fantasy Fridays articles.