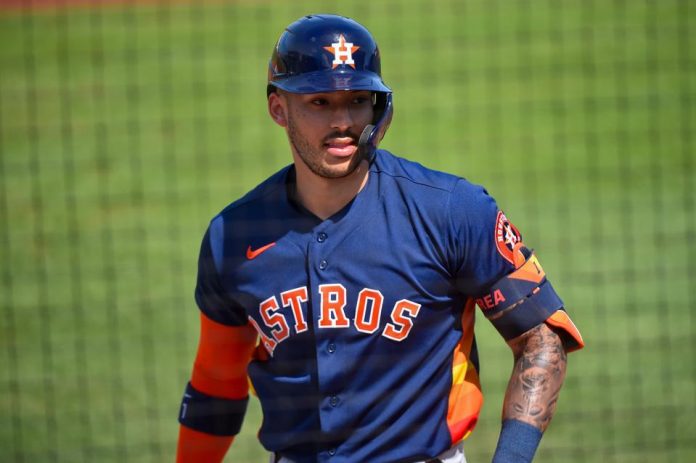 With Carlos Correa’s recent comments in regards to his contract it is a near certainty this is it for the Astros shortstop. The best offer the Astros came up with was 5 years and $120 million. Reportedly, Correa wants something closer to the Lindor range of 10 years $300 million. Let’s take a look at those numbers and try to figure out a ballpark range for what Correa is worth and who could pay him that.

We will be relying heavily on Fangraphs numbers for this exercise. Why? Because they have really smart people who have already done the hard work on figuring out how much teams spend on players. You can read one of their great articles on it here.

First thing is to look at what Correa has been able to contribute to the team. Correa was able to produce just over 5 WAR in each of his two most productive seasons (’16 & ’17). For the purposes of this I’m willing to assume some health and acknowledge the fact that he is entering his prime.

The next step is to look at the estimates for dollars spent per WAR. Looking this up brings results spanning from $7-9 million per WAR. We’ll split the difference and call it $8 million. So in this likely generous scenario, Correa would be worth $440 million.

Yes, I am well aware a player with Correa’s injury history is highly unlikely to hit that 55 WAR mark. I’ll also remind you that he is not asking for that much. The numbers thrown around for Correa would fit a 30-35 WAR performance.

Now we get to the second half of the equation. Who will pay him? Here is a quick rundown of each team by division.

Atlanta: Already have Swanson playing shortstop and a large crop of their own young talent they need to resign.

Marlins: It could be possible that they finally start to pay someone. They do have a ton of decent shortstops in the minors. Highly doubtful any will be as good as Correa, but maybe they want to try them and spend money elsewhere.

Phillies: They definitely have the need, they also already have 3 guys getting $23 million+. They could do it, but they would basically be locked into a long term stars and scrubs approach.

Brewers: If ownership wanted to get serious about winning, this is the team that could pay up. The fact that they made sure not to break $100 million this season and Yelich’s contract nearly doubles next season leads me to doubt the purse strings will loosen.

Cardinals: They have the poor man’s Correa with Paul De Jong at shortstop and didn’t pay Pujols when his contract was up sooo…

Cubs: This is a team that looks like it’s in full tear down. They could pay him, but they don’t look to be competitive for a while.

Reds: The Reds are in no man’s land. They kind of look like they could rebuild and compete rather quickly. I doubt they will. Still a possible landing place I’m worried about.

D-Backs: Currently have former Astros prospect Josh Rojas. He looked to be the next big thing in the minors, but has yet to pan out in the majors. That and they are a team in limbo. Not good enough to compete, not rebuilding. Doubtful they’d spend the money.

Dodgers: Yeah… about that…

Giants: Not far enough along in the rebuild.

Padres: They have Tatis.

Rockies: If they’re not going to pay up for their own stud why would they pay for someone else?

Rays: Have the #1 prospect waiting in the wings in Wander Franco. Also, $300 mil? Tampa? Seriously?

Yankees: Have Gleyber Torres locked up until 2025 at shortstop. They also have Stanton and Cole’s contracts to pay for a while.

Orioles: They do have the money and no one truly amazing to play the position. The question here is whether they feel like they are entering their window of competion. The Orioles are also run by Luhnow proteges. It’s possible they want to tank one or two more seasons.

Royals: They actually have two cost-controlled  guys in Mondesi and super prospect Whitt Jr at shortstop.

Tigers: This is one I could see. Hear me out. They have the money, they don’t have anyone else, and… they have AJ Hinch. If they feel their window is opening the Tigers could make a run.

Twins: They have the money and the need, I just don’t see them spending.

Angels: This could happen. They don’t have anyone but they will have Pujols’ $30 million. And what better way for Pujols to retire than to have the act stick it to us one more time.

Athletics: Lol, pay a guy? Lol, you must be joking.

Rangers: They tried paying up for a SS once before. It ended up giving the Yankees a ring.

Really, the only teams I could see making a run at him at his price are the Angels and Reds. The Angels would hurt. However, I don’t think anyone will sign anything for a while. The collective bargaining agreement is up and not likely to be resolved easily.

It is also entirely possible (more than likely) that the market is just not there to pay him what he’s worth. Especially if Trevor Story ends up in Cincy or Anaheim. It is one of those things that stinks for the man trying to make all he can. However, it looks like the only way Correa makes it back here to Houston.

With those factors working against him, my personal guess (and biased hope) is that he ends up back in Houston. The contract length will likely land in the middle at 8 years for somewhere around $27 mil with incentives.

Stay with us at Crush City Station and we’ll keep you up to date on the future of shortstop in Houston. Also, if you are into fantasy baseball, check out our series Fantasy Fridays here.